A New Beginning – Is it REALLY That Simple?

28 years ago last month, I resigned my job in a respectable London hospital and headed for the ski slopes of Switzerland. I remember dire warnings from my boss that I would never get another job again, but I wasn't too worried. When you've got God on your side, you can take risks that others can't. I knew He would look after me, and so it proved. It broke a bondage in my life, and looking back it was one of the best decisions I’ve ever made.

Now 28 years later I'm doing something similar, again back on the ski slopes of Switzerland but this time mainly to write not to ski.  Life is very short, and the older you get the shorter it looks. Like the saying goes, "No one ever lay on their deathbed and said I wish I'd spent more time working." I get a bit of correspondence back from what I write, and some of it shocks me. Yesterday I replied to someone who told me the way to get close to God is to read the bible for a minimum of four hours a day, and believe me they get much worse than that! One thing I've finally learned is that we don't get to God by trying harder, and in fact trying harder is often the surest road to becoming the ultimate Pharisee.
So I’ve come here to the mountains to reflect on the truth of the gospel, to learn, and to pass on what I learn to others as my own antidote to some of the more weird ideas about Christianity that come through to me.

I mentioned last time that before I came away I started attending a second church in Singapore. In addition to my old 'try harder' church of St Gregory's (not its real name by the way) I now attend the New Creation megachurch pastored by Joseph Prince. The theology of New Creation is pretty simple and uncomplicated. Basically it’s grace, grace, and more grace. The free gift of God permeating every area of life. Nothing to be earned, no way to impress God with our holiness.  Just accept what God has done for us and offered us for free, and enjoy it. I think I like this message!

But when you listen to this message, with its extreme simplicity, you inevitably find yourself asking the question "Is it REALLY that simple? Is that IT?" So to check myself on that I’ve taken some time to look again at some of the ‘great’ Christian thinkers and preachers of history to see if I’m missing anything. I’ve taken some time to look (fairly superficially) at these three: Martin Luther (1500’s), Augustine (400’s), and John Wesley (1700’s), and try and benchmark them against the story of the early church in Acts of the Apostles. My purpose in this is to run a reality check on questions like: What, actually, is the gospel? Have I got it right? Questions that we all need to ask ourselves constantly, all the way through life. It’s so easy to drift off course.

The first interesting thing that struck me about Luther, Augustine, and Wesley was the extreme similarity (in some ways) of their conversions. For all of them there was an extended period of years of often agonizing search for spiritual truth culminating in a sudden and blinding flash of insight resulting in a totally changed life. It seems there’s nothing particularly new about ‘born again’ experiences! (Luther actually used those words, born again to describe what happened to him that day.) In each case it can be pinned down to a particular day and a particular moment almost. Augustine was in his garden reading Romans. Luther was sitting in his study in the Wittenberg monastery also thinking about Romans. And Wesley was at a meeting in Aldersgate Street, London, listening to a reading of Luther’s Preface to the Epistle to the Romans. Clearly Romans has a bit to answer for! 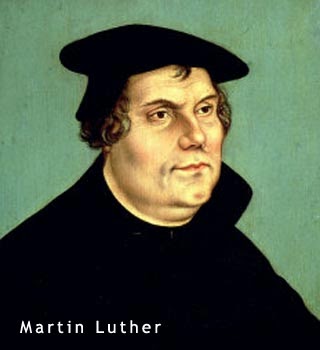 Looking at these three men in a little more detail, let’s start with Luther.  After years of unremitting failed efforts to live up to God’s imagined demands, he finally saw the light in Romans 1.17 “The righteous shall live by faith.” From then on and for the rest of his life he was totally uncompromising in his understanding of the gospel. The gospel, the good news, is purely and simply about what Christ has done in his death and resurrection. We contribute nothing at all, Luther tells us, except by choosing to believe. It’s all grace and more grace—justification by grace, through faith, as a free gift. Don’t even think about your faith, he said. Don’t even ask the question, Do I believe? Just think about what Christ has done—that’s all that matters.  I love that.

Later on Luther may have got into some weird stuff. When his early battles with the Pope were replaced by later battles with fellow reformers of different opinions, he seems to have found a new legalism. A bit of the Pharisee even. This comes out particularly in his destructive fights over minutiae of doctrine such as the Eucharist as well as his strong and intolerant commitment to the institutional church. But his lifelong commitment to the principle of salvation as a free gift of grace remained unchanged to the end.


I think a lot of the later negatives in Luther’s attitudes stem back to the ideas of Augustine, the Christian philosopher who had lived more than a thousand years before, but whose ideas still dominated church thinking in Luther’s time. Augustine, I'm afraid, is a man who commands little sympathy from me. The British evangelical writer David Pawson once described him as having done more damage to the Christian church than any other man who has ever lived (I hope I’ve recollected this correctly), and I think he may have a point.  The story of his conversion, as laid out in his autobiographical Confessions of St Augustine is brilliant and dramatic, and should be required reading for every Christian. But anyone who sees a vow of celibacy as being an essential part of his own personal conversion process, and as a part of that process abandons his common law wife of 15 years’ duration (and the mother of his son), seems to me to be starting off his Christian life on the wrong track.

Part of Augustine's problem is that he is basically a philosopher rather than a theologian. He is not so much interested in understanding the Bible, but more in taking Plato's ideas about the essential nature of reality, and fitting them together with Christianity into an integrated framework. I hesitate to say it of a man whose ideas formed the central basis of Western Christianity for 1000 years (and probably in Roman Catholicism still do) but I don't think his ideas have much to contribute. In fairness, he had no way of knowing at the time the full extent of the damage they would do in future generations. Nonetheless they more of a blueprint for everything that went wrong with Christianity in the mediaeval period than anything else. (I have to admit here to negative bias related to the experiences of my own early years of Roman Catholic upbringing.) Augustine’s conversion is the most interesting thing about his life, but it seems at odds with much of what followed, and with that I leave him.

Then we come to Wesley, who lived 200 years after Luther. I find this man altogether more encouraging—and interesting.  Who could not be interested by a man who could be baptized, ordained, and active as an overseas missionary, and active in bringing others into saving grace, and at the end of it all admit that he wasn’t even a Christian himself? Wesley is uncompromising. You believe, you receive the Holy Spirit, and you know about it! Without that you’re just not a Christian. Extremely simple.

I think Augustine would have questioned Wesley’s self-diagnosis (of not having been a Christian), and would have argued that he actually was a Christian all along. But personally I find Wesley's self-assessment more convincing.

Simply because, when I look at the final source, the Book of Acts, I see a gospel far more in line with Luther and Wesley than with Augustine.  In Acts, Christian conversion is presented as simple, dramatic, usually instantaneous, and life-changing. An existential encounter with the Holy Spirit. But above all EASY. I see nothing of Augustine in Acts.  Luther had a fantastic insight in resurrecting Paul’s concept of justification by grace through faith alone which had been almost lost since early church times. That was the doctrine changed the world. Wesley took it up in even more uncompromising form with equally dramatic effect.  All I know, he says in his diary, is that when I preach the gospel of grace, things happen, and when I preach anything else, they don’t.

So … is it that easy? Is it really all about grace, grace, and more grace? Augustine wouldn’t have said so (not in the sense that Paul speaks of). But for Luther it was, though he piled a bit of baggage on top later on. And certainly it was for Wesley. That’s what you see in the Book of Acts also.

And that’s how it is for me.

Posted by Norman Walford at 3:51 AM

Norman Walford
If I'd known how difficult it was going to be, I don't think I would ever have become a Christian, but I didn't so I did, That was in November 1969. I've not had too many problems with God, once I understood what it was about, but with the church I've had plenty. Its the community you can't live within and you can't live without. It was the struggle to resolve this paradox that led me to write my book 'How To Survive in the Pharisee Church' in 2009. Now in my blog I write about issues of practical Christianity in general, including most recently a satirical bent in The Chronicles of the Pharisee Church of St Gregory-the-Try-Harder, a semi-mythical (but mostly real) Anglican church on the island of Singapore, where I live.